Advanced Photonic Sciences (APSci) was the first manufacturer in the U. S. to offer domestically produced green microlasers, introducing our MicroGreen and MiniGreenlaser products in 2005. Today, our company continues to manufacture those devices, with many thousands in operation around the world in diverse applications such as medical alignment, pointing, materials handling alignment, and in various illumination devices such as laser flashlights and Laser Dazzlers. These devices, which continually find new applications, are known for their ruggedness and quality. We provide existing and new customers for our microlasers with excellent technical and applications support, and we have a stellar record for on-time product delivery. All of our products are manufactured according to exacting Toyota-like quality standards, and our company continually strives towards zero-defect manufacturing. 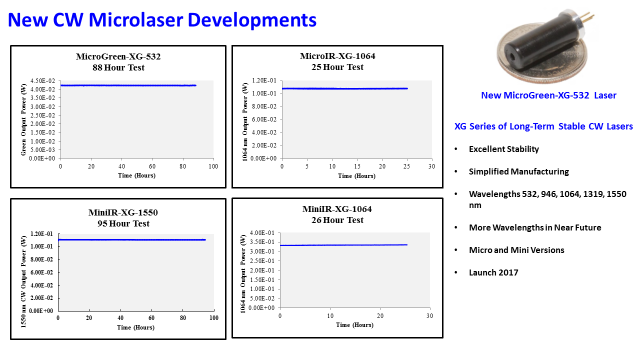 The first of these new microlasers, the MicroGreen-XG-532, with CW power output of 15-30 mW, for use in very long-term applications, was released by APSci during 2016. Additional XG microlasers operating at 532, 946, 1064, 1319, and 1550 nm will be released during 2017. The attached Figure shows data from a long-term  88 hour test of a MicroGreen-XG-532 nm laser, as well as MicroIR-XG-1064, MiniIR-XG-1064, and MiniIR-XG-1550 devices under long-term tests. These microlaser devices offer ruggedness and high power from a very small package, and have near diffraction-limited performance. Near infrared microlasers are expected to find applications in night vision and covert illumination applications where uniform illumination of distant targets is of interest. The small size, mass, and ruggedness make the XG series of microlasers ideal for military, homeland security, and surveillance applications.

APSci manufactures a number of laser modules for commercial sale as well as on a proprietary basis. Our WTR (wide-temperature-range) green or red laser module has been continuously manufactured for over ten years, with many thousands successfully operating in the field in very frigid and hot environments. 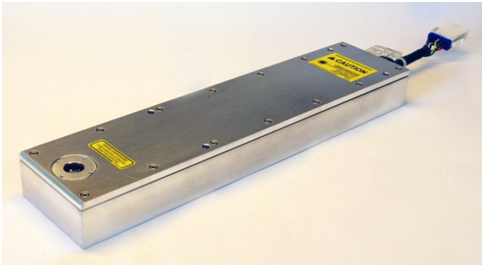 These modules are extremely rugged and easily survive the high-G environment associated with materials handling applications. They project a red or green line that can be used for the precise alignment of fork lift blades and other applications. APSci manufactures other modules used in medical laser devices, as an alignment aid in sawmills, and for various pointing and illumination applications. Please visit our Modules page for further information.

APSci’s scientists and engineers have helped to pioneer the development of cryogenic lasers. The company presently holds four world records for cryogenic laser performance, including the highest CW sustained average power (963W), the highest picosecond average power (758 W), the highest picosecond frequency-doubled green average power (201 W), and the highest efficiency (please see References page elsewhere on this website). The many advantages of cryogenically-cooling solid-state lasers have been described in detail in two recent Invited Review papers: (The Application of Cryogenic Laser Technology to Ultra-Short Pulse Lasers, D. C. Brown, S. Tornegard, J. Kolis, C. McMillen, C. Moore, L. Sanjeewa, and C. Hancock, Invited Review Paper, Applied Sciences 6, 23 (2016)), (Cryogenic Nanosecond and Picosecond High Average and Peak Power (HAPP) Pump Lasers For Ultrafast Applications, Invited Paper, D. C Brown, S. Tornegard, and Joseph Kolis,  Journal of High Power Laser Science and Engineering 4, e15 (20176)). The papers may be downloaded from the References page of this website. In those papers, our team also presented a recent compilation of the thermal, elastic, spectroscopic, nonlinear, and optical and dispersion properties of most laser materials used to date for cryogenic lasers. In general, cryogenically-cooling laser crystals to 77 K and below results in an orders of magnitude decrease in the value of thermally-induced aberrations as well as enhanced laser properties. For Yb based laser materials in particular, the kinetics system that is quasi-three-level at room temperature is close to 4-level at 77 K eliminating ground-state absorption, laser absorption and emission cross-sections increase, and the saturation fluence and intensity both decrease significantly.

Cryogenic lasers have operating characteristics that are very favourable for providing high average and peak power (HAPP) sources for ultrafast lasers, and may be used to provide high average power frequency-doubled pump lasers for conventional Ti:Sapphire ultrafast systems to increase the average power from typically a few tens of watts to the kilowatt level and beyond. The same cryogenic laser systems may be used to provide intense high average power nanosecond and picosecond pumps for OPCPA systems that are currently under intense development. Most cryogenic laser systems demonstrated to date have used liquid nitrogen as the coolant. In some cases, however, closed-cycle cryogenic laser systems are needed. In the Figure shown below, a completely closed-cycle Yb:YAG cryogenic laser amplifier system that was designed and built at APSci is shown. The system uses four closed-cycle pulse-tube coolers with about 90 W of heat removal at 80 K per cooler, and eight Yb:YAG active-mirror disks. Now in final testing, this system will be introduced to the laser marketplace during 2017. 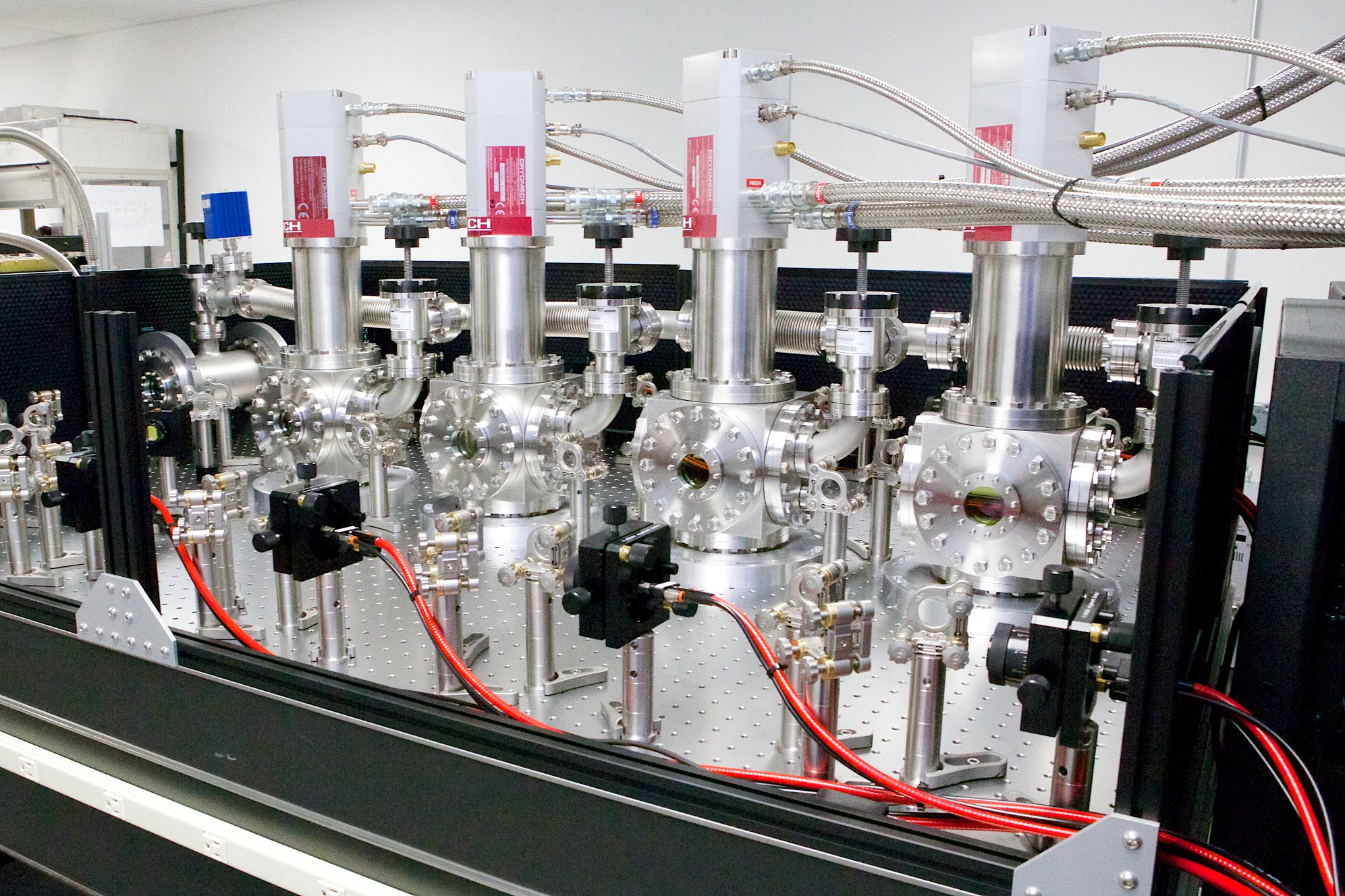 APSci encourages organizations interested in cryogenic laser technology to contact us. We have built and tested low and high average power Yb based lasers using rod, slab, and thin and thick disk active-mirror amplifiers that have operated CW, quasi-CW, Q-switched, and as high repetition rate picosecond amplifiers. We seek industrial, academic, or military collaborations that can help advance the cryogenic laser state-of-the-art and that will mutually benefit the customer and APSci. Our organization can provide cryogenic lasers, amplifiers, cryogenic cooling systems (liquid nitrogen or closed-cycle pulse tube), and cryogenic pump chambers with or without crystals, pumps, and complete vacuum systems.

APSci participates in a number of laser and nonlinear materials collaborations, with Clemson University, the US Army Research Laboratory, and with Blue Ridge Optics. Our company has a robust laser materials research program, with a complete spectroscopy laboratory used to characterize new and legacy laser and nonlinear materials. Absorption and emission cross-sections can be obtained at room temperature and cryogenic temperatures down to about 77. We can also generate emission measurements in the range from 300-1700 nm.

Our collaboration with Clemson University involves the investigation of hydrothermally-grown laser and nonlinear materials, a particularly attractive crystal growth technology that is scalable, results in significantly lower growth temperatures, and minimizes the creation of voids and defects during growth. This is a particularly attractive growth option for sesquioxide laser materials that have traditionally been grown using other methods that need very high growth temperatures, exceeding 2000 oC. Over the past 6 years, our groups have investigated scores of laser materials. Most notable amongst these are the nonlinear materials RBBF, KBBF, and KTP, and rare-earth doped laser materials that use as their base crystals Lu2O3, Y2O3, Sc2O3, and LuAG. We have in addition grown and investigated co-doped materials such as Cr4+, Nd:YAG and Cr4+, Yb:YAG. Our collaboration also demonstrated the first epitaxial-like deposition of Sm:YAG layers on YAG, a technique that is promising for the suppression of amplified spontaneous emission (ASE) and parasitic oscillations in Nd:YAG laser amplifiers and crystalline fiber amplifiers.

In the Figure below, we show absorption cross-sections as a function of wavelength for the new laser material Yb:Lu2O3, obtained at five different temperatures: 80, 150, 200, 250, and 295 K. 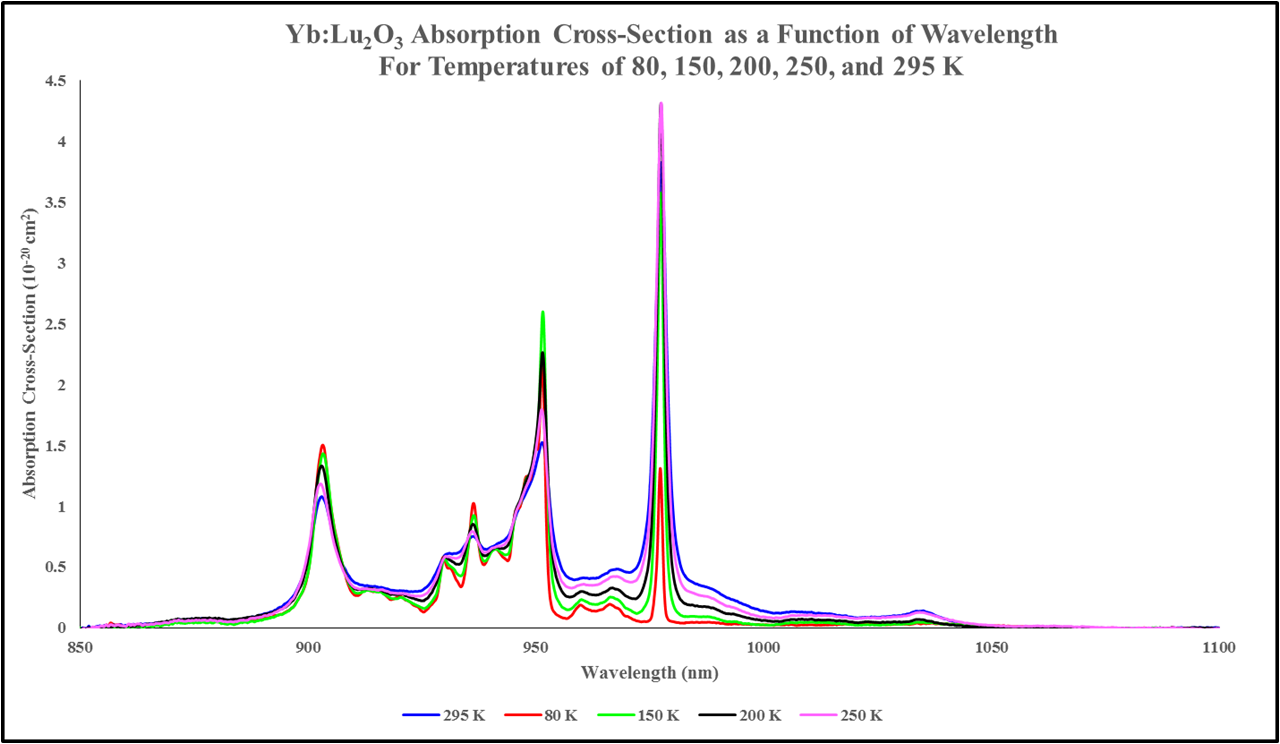