The name Advanced Photonic Sciences (APS) more accurately describes the myriad of commercial products, including diode-pumped solid-state lasers, modules, and systems offered by our company, and also emphasizes the science and technologies basis that informs all of our products. It also recognizes our internal and collaborative research and development activities and capabilities including the development of new laser technologies as well as laser and nonlinear optical materials. 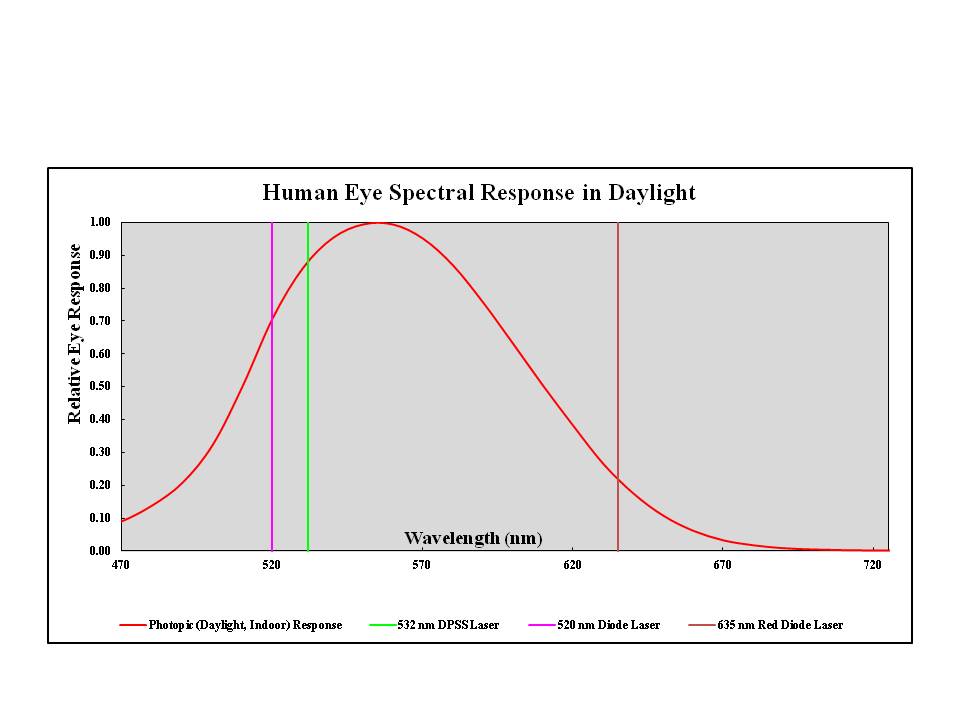 The Figure above shows the photopic relative human eye response curve, that applies for daylight and indoor lighting conditions. At 635 nm, the response is about 20% of that at the peak of about 545 nm. A green diode-pumped solid- state (DPSS) laser typically operates at about 532 nm, or about 90 % of the peak value. Thus under daylight and indoor lighting conditions, a green DPSS laser appears to be 4.5 times brighter than a red diode laser operating at 635 nm. This is the primary why DPSS green lasers have largely supplanted red diodes in many applications. In many cases, the red diode laser operates at even longer wavelengths to reduce cost. For a wavelength of 670 nm for example, the green laser visibility advantage is about a factor of 18.

GaN based green laser diodes began appearing commercially about 5 years ago, and typically operate around 520 nm. 530 nm devices may also be purchased, but at a substantially higher price. As shown in the Figure above, 520 nm laser diodes are further away from the peak human eye photopic peak sensitivity, and compared with 532 nm DPSS lasers, are 30 % less visible. APSci has tested Osram green laser diodes operating at 520 nm with our DPSS MicroGreen and MiniGreen lasers operating at 532 nm, at the same output power level, and the green Osram diodes appear distinctly blue-green, whereas our DPSS lasers appear as a true green color. A comparison of the operating characteristics reveals that Osram green laser diodes actually have a lower operating wallplug efficiency that our DPSS lasers. In addition, the Osram green diodes require an operating voltage of typically 6.5 – 7 V, significantly higher than the typical 2.0-2.2 V required by DPSS lasers. Thus off the shelf laser diode drivers cannot be used, necessitating the development of new power supplies, particularly miniature drivers needed for compact modules. In addition to the aforementioned disadvantages, green diodes, like must modern diode lasers, have a highly astigmatic power output, where the fast axis perpendicular to the stripe is substantially Gaussian and diffraction-limited with a large 1/e 2 beam divergence, whereas the slow-axis parallel to the stripe is highly multimode with a much lower 1/e 2 divergence. This behavior makes the collimation of the output beam and the achievement of uniform illumination difficult to obtain. In contrast, a DPSS green laser emits a near-diffraction-limited circularly symmetric Gaussian beam that is easy to collimate and that propagates with a predictable circular profile.

In spite of the obvious disadvantages of green diode lasers, for some applications, their use is warranted. Green diodes are less temperature sensitive than DPSS green lasers, and for cases like laser pointing where a bright spot is required, are simpler to deploy. The brightness of the spot size masks the underlying poor beam profile thanks to the saturation of the response of the human eye. In other applications such as line generators that use a Powell lens, orienting the diode can result in a perfectly acceptable uniform green line. In general, applications involving distances of some tens of meters can be successfully addressed with green laser diodes, whereas green DPSS lasers are ideal for further distances out to many kilometers. It should be pointed out, however, that for applications like laser Dazzlers (ocular interrupters) in which eye-safe performance is a necessity, it is far easier to build such devices using predictable circularly-symmetric DPSS green beams than the multimode astigmatic beams produced by green laser diodes.

All APS Products Comply With the Requirements of the Directive on the Restriction of the use of Certain Hazardous Substances in Electrical and Electronic Equipment (RoHS 2002/95/EC-RoHS).